We called for the demolition to be halted on the Atlantic Yards / Pacific Park project site when it was made public that the agreements did not bind the developer to complete it in the 10 years they had promised. In the interim, any empty lots that were created would become parking lots or construction staging areas. Then, the economy tanked in 2008. By that time, most buildings and even a public bridge had been demolished, and streets were closed without a realistic schedule for construction to start, never-mind finish.

A neighbor reached out to me because he’d heard about seed bombs, a guerilla gardening tactic from the 1970s that could be used to plant flowers in lots that are enclosed by fences. For once, it was an opportunity to do something proactive. Plus, so much of what we had already done was public, even directed towards the media. This was an opportunity to do something discretely, just for us.

A local florist donated used flower seeds and a potter contributed clay. We bought a few bags of soil. We had to guess how to make the bombs because the recipe is inconsistent online. For some, we stirred the seeds directly into the mix, and for others we made flat discs with seeds set on top, like chocolate chips on a cookie.

Ultimately, we made around 1,500. We had to be much less sneaky throwing them into the lots than we thought because so few people actually pay attention to others when they are outside. We even managed to throw bombs into the empty lot next to the police precinct as people walked by. 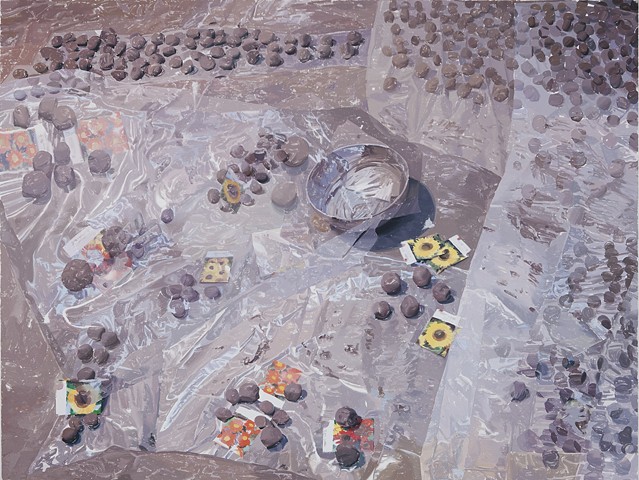 Seed Bomb Factory
click on image for text
< previous next >